This past summer marks the 200th anniversary of the infamous Year without a Summer, during which the Villa Diodati near Lake Geneva in Switzerland served as the setting of a historic literary meeting of the minds. Two of the remarkable products of that gathering (which included Mary Wollstonecraft Godwin, later to become Mary Shelley, Percy Bysshe Shelley, Claire Clairmont, Lord Byron, and John Polidori) were the novel Frankenstein, the pioneering work of modern science fiction, and the short story "The Vampyre" by John Polidori, the first great prose work of vampire fiction.

A new film dealing with the story behind the stories (A Storm in the Stars, starring Elle Fanning as Mary, Douglas Booth as Percy, Bel Powley as Claire, Tom Sturridge as Byron, and Ben Hardy as Polidori) is scheduled for 2017. But you don't have to wait until next year to see a movie about the events of 1816. 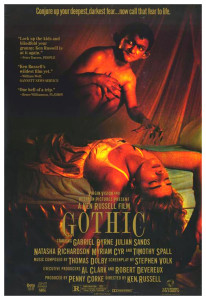 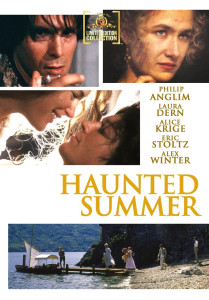 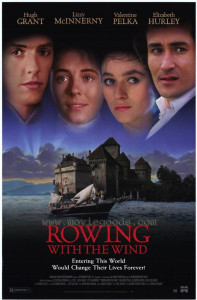 My Favorite: The Trippy One
Gothic (1986)
This has perhaps the best and most convincing cast of the three, with the late, great Natasha Richardson as Mary, Julian Sands as Percy, Myriam Cyr as Claire, Gabriel Byrne as Byron (I can't unsee this), and Timothy Spall as Polidori. It isn't for everyone, though. The more you know about what happened when the gang got together (such as Percy's drug-induced freak-outs and dreams), what inspired them (one part, for example, reenacts the scene from Fuseli's The Nightmare, as you can see in the above photo), and what ultimately happened to them (such as the nature of Percy's death), the more this will seem like a well-informed and evocative montage rather than a series of very trippy hallucination sequences. Mary's naive intelligence, Percy's eccentricity, and Byron's, um, Byron-ness aren't the easiest things to capture, and this film does the most successful job of it I've seen, while recognizing the complicated sexual dynamics of the group. It holds up as a psychological horror film in its own right.

Also Highly Recommended: The Dramatic One
Haunted Summer (1988)
This has a solid and subtle cast, with Alice "Borg Queen" Krige as Mary, Eric Stoltz as Percy, Laura Dern as Claire, Philip Anglim as Byron, and Alex Winter as Polidori. No complaints. This is a less fantastic, more intimate portrait of the Villa Diodati gathering. Gothic never loses the sense that these individuals were larger than life, half real and half legend; Haunted Summer moves more toward humanizing these brilliant and troubled souls. As this review notes, "Ivan Passer directs this beautifully photographed literary drama based on Anne Edward’s 1972 novel. In a very fluid and dreamlike way, Haunted Summer explores some of the dangers and a few of the exhilarations of living in an ivory tower world of art. Krige steals the film with her deft and nimble portrait of the woman who would eventually write Frankenstein."

Meh: *Shrugs*
Rowing with the Wind (1988)
This film was miscast, with Lizzy McInnerny as Mary, Valentine Pelka as Percy, Elizabeth Hurley as Claire, Hugh Grant as Byron (yeah, I know, right?), and José Luis Gómez as Polidori. As one review on Rotten Tomatoes puts it, this is a work of "music, scenery, girls getting out of bathtubs..." My favorite comment there is this one: "I give it a couple points for the giraffe." Speaks volumes, doesn't it? This film does have a few moments, but on the whole it's jumbled, unsure of what it wants to accomplish, a far cry from the other two.


"And there, ladies and gentlemen, on the other side of the lake we have the famous Villa Diodati where Lord Byron, greatest living English poet, resides in exile. Romantic, scholar, duelist, best-selling author of Childe Harold, he was forced to leave his native land after many scandals including incest and adultery with Lady Caroline Lamb. 'Mad, bad and dangerous to know,' she called him.... Bedroom, top right."
- Tour Guide, Gothic
Collapse