How about starting December with some good news?!?

I am absolutely delighted to be a part of this.

Lakeland, FL: Start-Up Comic Publishers Hocus Pocus Comics will release their dynamic debut comic, The Imaginary Voyages of Edgar Allan Poe, and their website, hpcomics.net, on January 1st, 2017. This begins their first wave of properties to be sold on ComiXology, with the publishers releasing four additional titles throughout 2017. 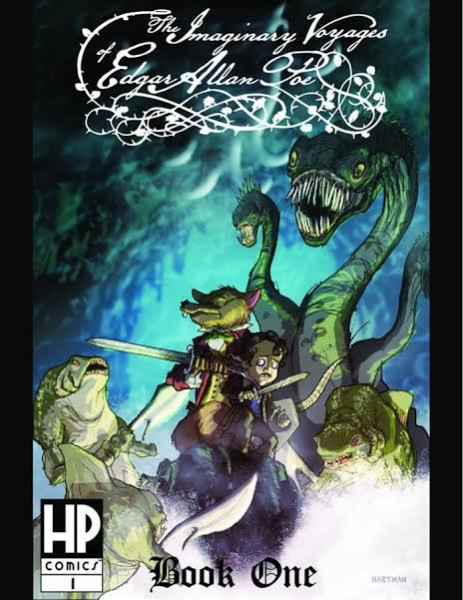 The Imaginary Voyages of Edgar Allan Poe is a rebranding of the Harvey and Eagle Award-nominated Surreal Adventures of Edgar Allan Poo created by Hocus Pocus Comics’ founder, Dwight L. MacPherson. The Imaginary Voyages of Edgar Allan Poe offers a twisted glimpse into the dream-life of America's greatest fantasist, Edgar Allan Poe, in the darkest time of his life. Book 1 will be reprinted as Book 1, Issues 1-4 (with an exclusive cover by David Hartman, Rob Zombie album cover artist and producer of Phantasm: Ravager). Book 2 will feature an updated script and all-new art by Luis Czerniawski (Transformers: Evolutions, Kolchak the Nightstalker: The Forgotten Lore of Edgar Allan Poe) and Book 3 is a brand-new story that will finally complete MacPherson’s magnum opus. As he says, “Many readers have asked me what happened to Book 3, as they loved the characters and story. I’ve often joked that it’s a ‘lost book.’ Well, the time is right to finally complete this epic, and I couldn’t be more excited to share this ‘lost book’ with the world!”

Hocus Pocus Comics’ second title, Houdini’s Silver Dollar Misfits, is described by MacPherson as “Harry Potter meets Gravity Falls.” The first issue will be released this spring, and it will feature a cover by David Hartman and interior art by Mathieu Benoit (Jim Reaper: Week One, Lil’ Hellions: A Day at the Zoo).

Speaking on Hocus Pocus Comics’ mission, MacPherson says, “I believe that telling incredible stories is fundamental to a successful publishing company. There are many publishers pumping out a whole lot of mediocre properties, but we would rather take our time, stay small, and produce 3-4 extremely well-written, beautifully-illustrated books per year that will stick with readers long after they finish reading. We believe that good stories are magical, and we will do everything in our power to conjure some truly unforgettable magic.” To that end, MacPherson has put together several stellar teams working on books of several different genres. Hocus Pocus Comics’ motto is Imaginatio est Magicae (Imagination is Magic). Their goal is to create the future’s myths and legends, one comic at a time.

President and Publisher: Dwight L. MacPherson
Comic creator, writer, and editor Dwight L. MacPherson has been one of the most prolific writing professionals for more than 10 years. A longtime advocate of webcomics and digital media, his steampunk webcomic, Sidewise (DC Comics), won the June 2009 Zuda competition. He has also seen his creator-owned properties published by Image Comics, IDW Publishing, and many others. For more information, visit his website.

Editor-in-Chief: Amy H. Sturgis
Amy H. Sturgis holds a Ph.D. in intellectual history from Vanderbilt University, teaches at Lenoir-Rhyne University, and specializes in Science Fiction/Fantasy and Native American Studies. The author of four books and over fifty essays, and the editor of six books, Sturgis has won awards for her scholarship (The Imperishable Flame Award for J.R.R. Tolkien Scholarship), journalism (Best Magazine Review/Criticism/Column Award from the Los Angeles Press Club), and podcasting (The Sofanaut Award from listeners of the Hugo Award-winning StarShipSofa). For more information, visit her website.

Production Manager: J.M. Bryan
J. M. Bryan is a writer and designer. He has an Associates in the Arts degree from Jackson College and a Bachelor of Theology w/minor in Language from Michigan Baptist Seminary. He spends his days with his wife and two children and his nights pouring his imagination onto paper. He is currently writing two comic series.

Vice President, Administration: Rebecca MacPherson
Rebecca MacPherson has over seven years of TV/Film and Theatre Production experience from her tenure at both Tribune Studios and Fox Studios. An NAACP Award for Best Local Producer nominee for the Los Angeles production of Stage Directions, she worked with Academy Award-winning actor Denzel Washington as Production Secretary on his directorial debut, Antwone Fisher, for Fox Searchlight Films.